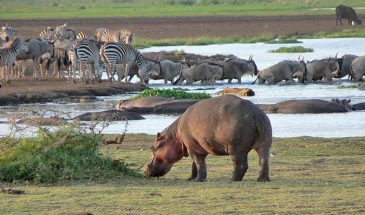 The best combination of “five easy to access” northern parks. You will visit the best of the northern circuit – Serengeti National Park,…

The best combination of “five easy to access” northern parks. You will visit the best of the northern circuit – Serengeti National Park, Lake Eyasi, Lake Manyara National Park, and the Ngorongoro Crater. Lake Manyara is ideal for viewing birdlife. Ngorongoro is home to Africas’ largest lions, black rhinos, elephants, wildebeests, hyenas, and cheaters, the largest intact crater in the world. Tarangire is a famous park filled with baobabs and wild palm trees with a large variety of games such as zebras, elephants, and giraffes.

After breakfast the tour departs. First stop is Arusha Town for any last minute purchases before we head off on safari. Afterwards we head to Lake Manyara. Lake Manyara National Park offers breathtaking views and a large variety of habitats. Acacia woodlands, water forests, baobab strewn cliffs, algae-streaked hot springs, swamps and the lake itself. And thanks to this the small Park is able to support a large number of animal species and incredible bird life. Manyara has the largest concentration of baboons anywhere in the world and the lions here are also renowned for their tree climbing. Late afternoon transfer to our private bush camp beside Lake
MEALS: Lunch, dinner, bed and breakfast
ACCOMMODATION: Lake Eyasi Bush camp

Distance: 100km
Non – game viewing time : 4 hrs
Early morning hunt with the Bushmen, with tuition in survival skills. After transfer to Ngorongoro Conservation Area, You will descend over 600 meters into the crater to view wildlife. Supported by a year round water supply and fodder, the Ngorongoro National Park supports a vast variety of animals, which include herds of wildebeest, zebra, buffalo, eland, warthog, hippo, and giant African elephants. Another big draw card to this picturesque national park, is it’s dense population of predators, which include lions, hyenas, jackals, cheetahs and the ever-elusive leopard, which sometimes requires a trained eye to spot. We will visit Lake Magadi, a large but shallow alkaline lake in the southwestern corner, which is one of the main features of the crater. A large number of flamingos, hippos and other water birds can usually been seen here. Dinner and overnight at Ngorongoro Simba Campsite
MEALS: Lunch, dinner, bed and breakfast
ACCOMMODATION: Ngorongoro Simba Campsite

Distance: 145km
Non – game viewing time : 3 – 4 hrs
After breakfast, depart for Serengeti National Park Leaving the highlands behind, we descend into the heart of wild Africa – the Serengeti National Park – with its endless plains, rolling into the distance as far as the eye can see. Then heard to the central park area, known as the Seronera area, one of the richest wildlife habitats in the park, featuring the Seronera River, which provides a valuable water source to this area and therefore attracts wildlife well representative of most of the Serengeti’s species. Arrive in time for lunch and enjoy an afternoon game drive in the Serengeti national park. Dinner and overnight at Serengeti Seronera Campsite
MEALS: Lunch, dinner, bed and breakfast
ACCOMMODATION: Serengeti Seronera Campsite

Non game-viewing travel time: 4-5 hours
Distance: 300 km
After an early breakfast, Do a morning game drive then after do a game en route towards north Serengeti. Check out of the park at Klein’s gate then transfer to Lake Natron for an early dinner and over night. Go for an evening lake Natron walk for sunset if time permits. Dinner and overnight at Lake Natron Campsite.

Open All Close All

How long does Tanzania safari take?

The duration of an ideal Tanzania safari can take between 5 to 10 days, to ensure you hit all the top spots on your safari. The length though can depend on how long you'd like to stay and enjoy a specific place/hotel/park on your itinerary

What to know before going on an African safari?

It's okay to ask questions of your guides. ...
Bring a good DSLR camera and a high-quality zoom lens. ...
If you can, bring a back-up camera in case your DSLR goes on the fritz. ...
Anti-malarial medication gives you CRAZY dreams. ...
Ticks. ...
Bring extra camera batteries.

Is Serengeti better than Masai Mara?

Basically, there's no one better than the other here, both Serengeti and Masai Mara are amazing safari destinations. Masai Mara is probably slightly more concentrated (year-long) from a wildlife point-of-view, but Serengeti has mind-blowing vastness. There are pros and cons to going on safari in both.

What is the best month to go to Tanzania?

The best time to visit Tanzania is from July to October when the country is at its driest. This coincides with the migration river crossings, however, all the parks offer amazing wildlife sightings at this time as the grasses and bush are at their least dense.

Can you wear jeans on safari?

Jeans are a must-have when it comes to what to wear on safari! You'll also want to have a comfortable pair of pants that you can wear around the campsite at night. Safari Packing Tip: Make sure you're packing light. You should need no more than 5 pairs of safari pants.

Is a safari worth it?

If you can only spend three to four days on safari, it's probably not worth the travel and cost. ... Since every single day and hour is unique on an African safari, the more time you have to explore and see what the wildlife has to offer, the better

Which is better Serengeti or Ngorongoro?

Can you wear shorts in Tanzania?

Towns and cities are more liberal about shorts than villages but the general rule is that you avoid wearing shorts to avoid offending the local people, whether in a town or a village

What colors should you not wear on safari?

Avoid black and dark blue clothing (both colors attract tsetse flies), and leave bright-white items at home; safari parks are often dusty, and white clothes may get dingy. You want to see wildlife on safari, not look like it!

Is Tarangire in the Serengeti?

Part of Tanzania's northern circuit, Tarangire is often visited together with the Serengeti or Ngorongoro Crater, usually starting in Arusha. From Arusha, it's a two-hour drive to the park entrance. This is the hot, dry season.

What kind of food do they eat in Tanzania?

Is the Serengeti protected?

The Serengeti encompasses Serengeti National Park and a number of protected game reserves and conservation areas maintained by the governments of Tanzania and Kenya. The region hosts the largest mammal migration in the world and is a popular destination for African safaris.

What do they drink in Tanzania?

Tea is the most popular drink in Tanzania with the locals preferring chai tea. Coffee is another favourite and is often sold by street vendors. Local beers include Kibo Gold, Serengeti Lager and Tusker, while mbege is a beer made from bananas.