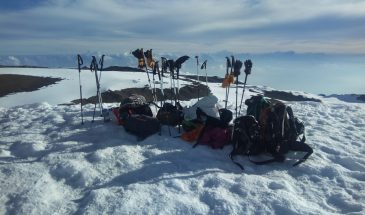 The Marangu route is considered to be the easiest and most comfortable route to reach the summit of Mt Kilimanjaro. The route is…

The Marangu route is considered to be the easiest and most comfortable route to reach the summit of Mt Kilimanjaro. The route is well-developed and the climb is constant and moderate. Only the approach to the summit is the exception as it is slightly more demanding. The accommodation on this tour is in simple mountain huts, which might be an advantage compared to the camping routes.

The route starts from the park headquarters in the village of Marangu and heads straight westwards towards Kibo. The trail goes through lush rainforest, heath, and moorland to the alpine desert and ultimately the arctic zone at the peak and same route down.

Day 6: Kibo Huts to the summit to Horombo huts
Day 7: Horombo huts to Marangu gate to the hotel

Day 6: Kibo Huts to the summit to Horombo huts
Day 7: Horombo huts to Marangu gate to the hotel

Our Kilimanjaro adventure starts the Moment you land at Kilimanjaro international Airport, You will be met by our staff at the airport and transferred to our partner lodge in Moshi in the peaceful surrounds of our comfortable pre and post trek accommodation in Honey Badger, or Q wine hotel. Guide will perform a gear check for you after dinner so that next morning you will be ready for your tour start.

Hiking time: 3-4 hours
Distance: Approximately 12 kilometers
Habitat: Montane forest
After an early breakfast at your hotel, you will be picked up from Arusha (1400m) and driven to the Marangu Gate (1980m). At the gate, the porters will organize and pack the belongings for the hike while you and your guide register with the Tanzania National Park (TANAPA). You will then begin your ascent into the rainforest. During this section of the hike, you should expect rain, mud, and fog. Also, be on the look out for wildlife, including Colobus monkeys! After 3-4 hours of ascending, you will reach the Mandara Hut (2700m). Each hut has 6-8 sleeping bunks (sleeps 60 hikers total) with solar generated lighting. Next to the central hut there are flush toilets. The porters, who arrive at the campsite before the clients, will boil water for drinking and washing. The chef will prepare a snack then dinner for the clients. At nighttime, mountain temperatures may drop to freezing so be prepared!

Hiking time: 6 hours
Distance: Approximately 15 kilometers
Habitat: Moorland
Following breakfast, hikers will begin their ascent out of the rainforest and into the heathen moorland. Hikers will pass the Maundi Crater and are able to climb up to its rim for a spectacular view of the Kibo Crater. In the moorland, you will spot exotic plants, including giant lobelia and groundsel. After 6 hours of hiking, you will reach Horombo Hut (3720m). Horombo Hut sleeps 120 hikers and is located on a small plateau. Similar to the first night, the porters will prepare drinking and washing water for you. You will enjoy evening snacks then dinner prepared by our chef. Be prepared for a cold night as temperatures drop below freezing at this site.

At Horombo Hut, you will spend the day allowing your body to acclimate to high altitude. You will have the option of doing a day hike to Mawenzi Hut (4600m) for further acclimatization with your guide. Breakfast and dinner will be at the hut and lunch will either be packed or at the hut depending on your preference for the day

Hiking time: 6 hours
Distance: Approximately 15 kilometers
Habitat: Alpine desert
Following an early morning breakfast, you will continue your ascent into the alpine desert habitat. Hikers have the option of 2 trails that lead to Kibo Hut (4700m). The upper route (located to the right of the fork) is the same trail used the previous day for the day hike to Mawenzi Hut. The lower route (located to the left of the fork) is the more popular route because it is a shorter hiking distance (1 hour shorter).
Kibo Hut is located in the “Saddle,” which refers to the area located between the peaks of Mawenzi and Kibo in an alpine desert. There is no water at this camp, but hikers can buy mineral water and soft drinks at the camp office. An early dinner will be served so hikers can rest before attempting the summit the same night. Your guide will brief you in detail on how to prepare for summit night. Get to sleep by 19:00!

Hiking time: 8 hours to Uhuru and 6 hours to Horombo
Distance: Approximately 6 kilometers ascent and 21 kilometers descent
Habitat: Stone scree and ice-capped summit
Your guide will wake you around 23:30 for tea and biscuits. You will then begin your summit attempt. The trail is rocky up to Hans Meyer Cave (5150m). You continue your ascent to Gillman’s point (5681m). Reaching this section is an impressive achievement as the trail is steep, rocky, and at high altitude. Gillman’s is located on the crater rim. From this point, you will usually experience a snow covered trail until you reach the summit, Uhuru Peak (5895m). Reaching the summit of Mt. Kilimanjaro is a lifetime accomplishment! You will be able to spend a short time on the summit taking photographs and drinking tea before the descent to Barafu begins. The hike down to Kibo Hut takes about 3 hours.
At Kibo Hut, you will rest and enjoy a hot lunch in the sun. After eating, you will continue descending down to Horombo Hut (3720m). You will have a dinner, wash, and rest soundly at the hut after a strenuous day.

Hiking time: 6 hours
Distance: Approximately 27 kilometers
Following a well-deserved breakfast, your staff will have a big celebration full of dancing and singing. It is here on the mountain that you will present your tips to the guide, assistant guides, chef(s), and porters. After celebrating, you will descend for 6 hours back to Marangu Gate (1980m). The National Park requires all hikers to sign their names to receive certificates of completion. Hikers who reached Gillman’s Point (5681m) receive green certificates and hikers who reached Uhuru Peak (5895m) receive gold certificates. After receiving certificates, you will drive back to Moshi for long overdue showers and more celebrations.

Early morning after breakfast, you drive to Ngorongoro while doing game drive en route. At Ngorongoro you will arrive at Simba Campsite where you will have dinner, briefing and sleep/ Enjoying the campfire before going to sleep.

Ngorongoro crater back to Moshi/Arusha

Ngorongoro Crater – Arusha /Moshi
After an early breakfast, you will descend over 600 meters into the crater to view wildlife. Supported by a year-round water supply and food. The Ngorongoro conservation Area supports a vast variety of animals, which include herds of wildebeest, zebra, buffalo, eland, warthog, hippo, and giant African elephants. Another big draw card to this picturesque national park, is its dense population of predators, which include lions, hyenas, jackals, cheetahs and the ever-elusive leopard, which sometimes requires a trained eye to spot. We will visit Lake Magadi, a large but shallow alkaline lake in the southwestern corner, which is one of the main features of the crater. A large number of flamingos, hippos and other water birds can usually be seen here. Late afternoon drive to Moshi/Arusha

Today your driver will meet you at the hotel and drive you back to the airport for your flight back home.

All accommodation is on sharing basis (i.e. you will be sharing with your travel companion a twin/double room in the hotel and a tent during the hike. If you travel alone, we will match you with a same-sex adventurer).

Please wait...
Open All Close All

How long is Lemosho route?

Lemosho route is around 70 kms or 42 miles whether you opt for the 7 or 8 day version. It joins up with the Machame Route between Shira and Barranco so the terrain is very similar.

How hard is the Barranco wall?

Barranco Wall Mt Kilimanjaro – A Steep Climb But Totally Doable. The Barranco Wall on Mount Kilimanjaro forms part of your early morning exercise on day 4 for climbers on the Machame, Shira, Umbwe and Lemosho Route. ... You need no technical climbing skills to be able to scale the Barranco wall.

Is the Barranco Wall scary?

Mount Kilimanjaro can be a dangerous mountain to climb. Nearly 1,000 rescues and ten deaths on the mountain occur each year. While climbing the mountain itself is dangerous, the Barranco Wall is a portion of the climb that does not require technical skills to navigate.

Which Kilimanjaro route has the highest success rate?

Lemosho has the highest summit success rate of all route! Machame is the second most popular route on Kilimanjaro

How many days is the Lemosho route?

The Lemosho route is a good eight day hike for those who have not trekked much at high altitudes, with an effective extra day's acclimatization, giving a better success rate. Experienced and already acclimatized mountaineers may opt for the more difficult 7 day ascent along the Lemosho route

Are there toilets on Kilimanjaro?

There are public toilets at every camp stop on a Kilimanjaro trek. You're going to need to lower your expectations though. Forget porcelain loos with lockable doors, marble sinks with soap dispensers, hot water and hi-tech hand driers.

Is it safe to hike Mount Kilimanjaro?

How cold is the top of Kilimanjaro?

At the summit, Uhuru Point, the night time temperatures can range between 20 and -20 degrees Fahrenheit (-7 to -29 degrees Celsius).

As we mentioned before, Kilimanjaro is suitable for beginners; they do very well. The best advice is for everyone to arrive in great shape. Don't underestimate the climb because you know someone did it who you believe was not fit. Train for the adventure.

Why do people fail Kilimanjaro?

Why is Kilimanjaro always snowy and cold at the top?

Why? Because winds carry moisture from the ocean. When they hit large objects, like mountains, they rise, cool and condense, forming clouds and precipitation (i.e. rain and snow). There are two main winds that drive weather patterns on Mount Kilimanjaro – the South-east trade winds and Northeast anti-trade winds.

Is climbing Kilimanjaro worth it?

Kilimanjaro is an achievement many hikers, athletes, and nature lovers have set their eyes on. But towering 19,341 feet, with a nearly 50% fail rate, reaching the peak takes a hefty amount of work against significant odds. Climbing Mt. Kilimanjaro is absolutely worth it.

How much training do you need for Kilimanjaro?

How long does it take to train to climb Kilimanjaro? If you aren't already active each day (hiking, walking, or running several miles), if you aren't in great shape it's recommended that you take at least 8 weeks (or 2 months) to train.

Is there cell service on Kilimanjaro?

The short answer is “Yes”. You may get a phone signal all the way through the summit. Over the years, the mobile network coverage on Kilimanjaro has improved greatly. Nearly everyone who treks nowadays brings Electronic Gadgets On Kilimanjaro, especially smartphones

What animals live on Mount Kilimanjaro?

When did Kilimanjaro last erupt?

How do you prevent Kilimanjaro altitude sickness?

How to minimize your chances of suffering from altitude sickness on Kilimanjaro:
Acclimatize prior to the climb. ...
Start the climb in the best possible health and with an excellent level of physical fitness. ...
Take it easy on the trail and in camp. ...
Drink plenty of fluids. ...
Eat well. ...
Sleep well. ...
Relax.

Why does my Kilimanjaro have glaciers?

The fact that there are still glaciers is due to the prolonged 'cold snaps', or ice ages, that have occurred down the centuries, allowing the glaciers to regroup and reappear on the mountain.

What is the best month to climb Kilimanjaro?

The best time to climb Kilimanjaro are the months of January through early-March and June through October. The clear skies, great views, and the sunshine makes it the best comfortable hiking conditions. However, there is always the possibility of weather changing dramatically, regardless of the season.